In 1859 the then Governor of British Columbia, Lord Douglas, enacted the Land Proclamation Act. It appears that Gambier Island was surveyed, and the lots designated in about 1875. In 1908 when Fred Murray purchased the Crown Lot 1299 (what we call the “Farm”) for $83.00 it had all been done, with the exception of the sub division of what is now the CBYS lot. This purchase did not include Lot 2911 which we refer to as the Fahrni Property. Murry purchased Lot 2911 (Fahrni Property) from the Crown in 1912. In 1915,  Murray sold the Farm Lot and the Fahrni Lot separately.

The facts surrounding the “White House” are a bit fuzzy. George St. John purchased the farm lot in 1934 and with a labour force of apparently Japanese migrant workers and their families who lived in various accommodations on the property, began to put the place together. George St. Johns is said to have commissioned a renowned architect from West Vancouver, Charles Burwell Kerrens Van Norman, to design the house. Van Norman is credited with modernizing the upscale housing designs in Vancouver and designed other projects including the Burrard Building and Park Royal Shopping Centre. The story goes that the house was intended to be built in another location on the property, but due to unknown factors wound up where it is. One story is that it was intended to be on what is now the Fahrni point, but seems unlikely as that property was owned by James McWhinney at the time. However, there is a caveat to this story in that of the some 530 architectural designs in Van Norman’s bio, this house is not listed, so maybe more fuzziness.

St John built a significant dam, power house and a bridge across the creek that provided access up the hill to the barns and labour housing. It’s said that St. John had dairy animals and planned to sell milk in Howe Sound. A walk around the White House still shows evidence of the stone retaining walls and landscaping endeavors. Some of the old buildings can still be seen up at the farmstead.

In 1938 the Farm Lot title was transferred to Mona St. John. That same year she applied for and received what is now our water lease. Our CBYS lot, designated Plan 11219 L1, appears to have been created March 22 of that year. There is no deed information, but it shows on the official survey of the water lease.

The farm passed through several owners, about which there is little or no information, when in April of 1952 Gerald and Helen Fahrni bought it. They were said to be race horse breeders in the Abbotsford area.

In early 1962, Frank Griffiths learned that the “Farm” was for sale and, as a member of the West Vancouver Yacht Club, suggested they buy it. He was turned down, but forged ahead and on March 16, 1962 with a group from WVYC made an offer to purchase. David Brander Smith is shown as the applicant. With reference to the WVYC archives, the group consisted of Frank Griffiths, Sherman Bardach, Lyle Barr, Dave Burnett, Alex Chisholm, Bruce Coles, Ian Coote, Peter Hoffar, Roy Keay, Dusty Miller, Les Simmers, Dave Smith, Terry Towns and Peter Richards. The price was listed at $50,000.

West Vancouver Yacht Club leased the property for the remaining year for $1.00, but in the end declined to purchase. Centre Bay Yacht Station Ltd. was incorporated October 23, 1962. Frank Griffiths was the first Company President and David Brander Smith a Director. The Company dropped their option to purchase the complete property and instead paid $25,000 for the lot we now have on February 6, 1963. The Company was originally structured with 200 shares, but after selling only 70 at $100 per share they reduced it to 100 as it stands today. The original maintenance fee was $250.

About this time, WVYC was re-building their floats and Frank Griffiths negotiated to purchase the old floats. He towed these floats to Centre Bay behind his boat, the Griffin III, with Basil Rae in tow with his boat to pick up the pieces that kept falling off. Later, they made the observation that there was not a substantial sandy beach between Hood Point and Gibson’s so they hired a barge to deliver pea gravel and sand to create our beautiful beach.

When a winter storm wiped out the docks, the company secured log bundles to act as a breakwater. These were replaced over time with a variety of scows to provide a more stable breakwater with more suitable anchoring. There have been many over the years and were generally wooden barges, many of which were built in the 40’s for transporting material and goods to northern BC and Alaska during WWII. As they became almost impossible to find over time we have changed to retired steel barges and of course, our dock space has increased to what you see today.

The remaining “Farm Lot” was sold to Gambier Estates in 1978. There is some information that a summer camp for kids operated there for a time with CBYS providing dock space, but it was short lived. The “Farm” was subsequently sold to Cedar Creek Farm Ltd. (Paul Cosulich) in 2001.

There doesn’t seem to be any record of when the Fahrni cabin was built, but, in 1953, Gerald Fahrni’s brother, Dr. Brock Fahrni purchased what we now call the Fahrni Lot from Sidney Darnbough. Dr. Fahrni was a strong advocate for the aged and campaigned for military vets, particularly those returning from the Second World War, and was remembered with a hospital named in his honour. With Fahrni’s death the property transferred to his wife Margret and then to her sisters who resided in England. They spent some summer time there and re-roofed the cabin.

In the summer of 1988, Lot 2911, the Fahrni property, came up for sale. At the time Fred Welsh (Timani Lu) was President. It was late June or July and without time for a shareholders meeting, the board made a decision to purchase the property and offered $170,000, which was accepted. The subsequent assessment to the shareholders of $1,700 per share caused quite a stir, but interestingly at the following AGM on the standard resolution to “Approve the Actions of the Directors”, it was passed unanimously.

In 2012, a gentleman’s agreement with our shareholder and neighbor, Paul Cosulich, gave better access to the farm with a road behind the cabin, and in exchange Paul built a bridge and access path to the cabin.

Most of the dates above come from the Provincial Land Titles Office, but some of the other content is memories and “dock talk”. Any corrections, additional information or comments would be appreciated.

A special thank you to Peter & Barbara Richards (Habitat), Bob Pettinger (Berceuse), Dave Welters & Missy Gervais (As You Wish) for bringing all the pieces together in one place. 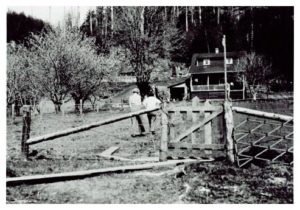 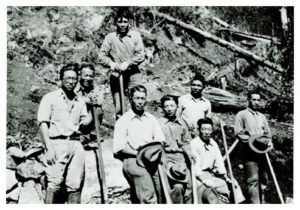 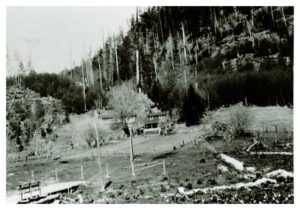 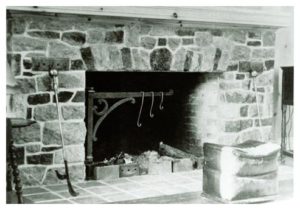 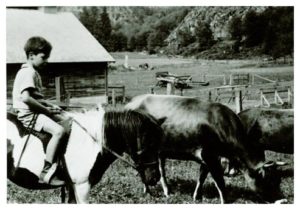 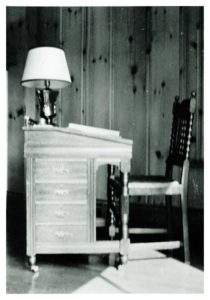 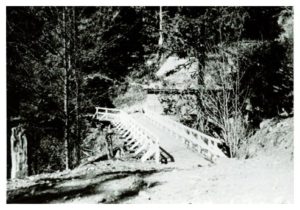 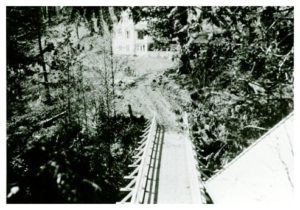